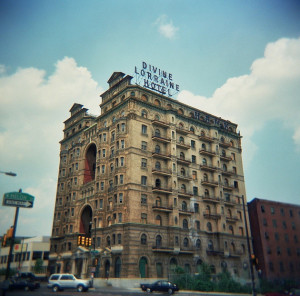 I am one with unique interests and hobbies and that is just how I am. I have never been very fascinated with celebrities or high profile people or fame. I have always found my interests elsewhere in the exceptional things of this world that catch my eye.

One of My Things is that I enjoy extraordinary architecture, art and other objects of individual beauty in life. I see something interesting often more, where others walk on by and see nothing of importance at all. I have always been this way.

As such.. there is a building in a city I have never been to, that I absolutely adore.

She stands tall on the north side of Philadelphia, PA. She was the first highrise hotel in the city. She was built by Willis G. Hale “whose eccentric and unique high Victorian designs made him the darling of the fashion-conscious arrivistes pouring into Northwest Philadelphia late in the nineteenth century and early in the twentieth century.”¹

The building I refer to is named The Divine Lorraine Hotel.

This building has an important place in history as it was a part of a very early civil rights movement in the 1940’s. She was the first interracial hotel in the city and from what I understand, she might have been the first interracial hotel in the entire United States. Father Divine was on the cutting edge of history, long before history happened.

A full detailed history of the Divine Lorraine is not the focus of this article, but I feel the article would not be complete without some background about her for those that are not familiar with her. There are many places online you can read her full history if you are interested in learning more. At the bottom of this article I include a list of links to some good pieces of information and photography.

If you are not familiar at all with The Divine Lorraine Hotel, I would suggest watching this video before continuing.

In 2003, Eric Blumenfeld purchased her but in 2006 he flipped her for a profit. The Divine Lorraine Hotel was then bought by a company that was supposed to fix her up and reopen her to the public. At that time she was still in very decent condition. However, the community felt betrayed as one day a bunch of men came to her with a large truck and gutted her out entirely. They took everything she had, all the furniture and floor tiles and even the doors. Inside, they tore her down to the very depth of her skeletal frame, leaving her as just a shell of the building she once was. I presume they sold all they could of her to whomever would be interested. Then they left her.. windows open, completely abandoned without any care about the safety or security of the building.

This left her to the elements and heavy vandalism. Hundreds of people broke into the Divine Lorraine over the years that followed. The vandals proceeded to cover her with graffiti inside and outside and even on the roof. People stole the statues that Father Divine had placed on her and took whatever was left that they could find after the company had gutted her. 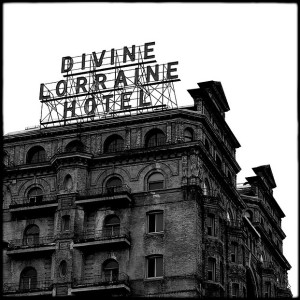 These people that broke into her mistreated her, disrespected her, abused her and found no reason to care otherwise. There were fires that broke out suspiciously and the “L” from one of her iconic signs has mysteriously gone missing somewhere in the last couple of years.

I have looked at literally hundreds of photos of The Divine Lorraine Hotel over the last few years. There are so many photos showing her in all her beauty from back in the early 2000’s and earlier. But there is even far more photos that show her in a depleted and ruined state.

Billy Procida noticed her beauty too, as he is the one that decided to he would help fund the restoration of The Divine Lorraine Hotel.

And so it was in May 2014 E.B. Realty and Billy Procida came to her rescue. Eric Blumenfeld (the president of E.B. Realty), who once bought and flipped her, bought her up again in 2012 and made big plans for The Divine Lorraine Hotel and now those plans have the funding to make her restoration happen.

Over the past couple of weeks in late May and early June 2014, the graffiti that covered her skin has been removed. They are protecting her and working on her constantly. It is the end of the vandalism and a time of rebuilding, recovery and restoration.

The Divine Lorraine Hotel is going to have a future. She is being taken care of, being properly restored and being given back a future that she might not have had if she stayed in that ruined condition for too much longer.

She was once torn up inside and not loved or cared about. In time it is showing that while many people have hurt her.. the love of others can and will heal her.

She will live again. This brings me joy and happiness. I nearly cried when I saw the news about her a few weeks ago. I am an emotional and compassionate person. It really makes me smile to see each new announcement on her recovery. I am so delighted that she will make it past all of that abuse and she will come out looking like new. One day a few years from now.. she will be filled with life and celebrated once again as she deserves to be.

You might ask.. how could I care so much about a Hotel I have never even visited in person?

Quite simply.. I identify with her. I am no one special or beautiful like she is, but we are both survivors. I understand what she has gone through in my own way. I too have been abused by people who should have protected me, damaged by complete strangers, and wounded by some who claimed to love me. I have been abandoned, unloved, uncared about, forgotten about and tossed away completely. And so has she.

Once someone has trampled upon you in such a life altering way, it changes who you are at the very core of your being. It changes how you perceive yourself and how the world perceives you. You are changed forever after such experiences.

Like the Divine Lorraine, my scars are fading and I am finding my future.  The vandalism has stopped and life has begun. The love and care from those in our lives are making us better and soon we shall both truly live again.

One day… I will fly to Philadelphia and I will meet Divine Lorraine.